The general format of a recruitment fair is where universities set our their stalls, and give out information on the courses they offer, for students who are considering which career path to take. However, Pilar Fortuny, organiser of the Agora event, wanted to do something different. As she told us herself: “universities are always talking, and they need to listen more”.

And listen we did! The day started with a round table discussion of Bachillerato students on what they found to be important in higher education. We were extremely impressed with their preparation, and it was enlightening to listen to such informed opinions by the people who, after all, are the principal stakeholders in higher education. ESEI put students at the centre of every aspect of their education and we found ourselves agreeing with a lot of what they had to say. 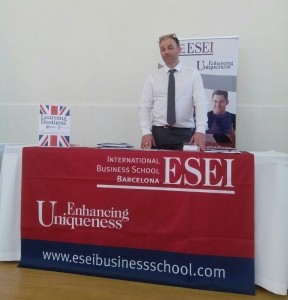 Afterwards, while the usual university fair was taking place (and where we met so  many lovely  students-some who were really excited about the idea of studyig with us  in Barcelona, and some who  just wanted to have a chat about their lives), there was a  third part to the event happening upstiars.  Agora asked the universities to prepare  workshops that might be useful to their students, as part of the  fair. Some universities  did not want to do this, but we thought it was a great idea to make our visit  more  meaningful. The problem was: what can you do in 50 minutes that will actually make  an impact  on the students?

If you have never heard of this, you can see the TED talk here. Basically, participants are given 20 sticks of spaghetti, a yard of masking tape, a yard of string and 1 marshmallow. They have 18 minutes to use the materials to build the tallest freestanding structure they can, with the marshmallow at the top.

Now what typically happens is that participants spend the first bit of the 18 minutes jostling for prominence and to get their approach accross as the “best” design. There is a bit of planning and then a mad dash to get it done. By the time the 18 minutes is almost up, they add the marshmallow to the tops and…collapse! This did actually happen in one of our groups; exactly as was described here. But they are not alone; this trend plays out in groups of CEOs and Business School students alike. The most successful groups who actually do well in this are….kindergarten children! 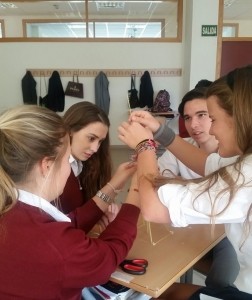 So why did we do this? We wanted to underline the idea that the “Winner takes all” approach to business is really disappearing. Modern, creative businesses thrive on collaboration and synergy, just as our winning group of marshmallow challengers did. Those who do well at solving creative problems-without the scaffolding of guidelines-do so not through abstract theory and planning but rather by experiential and creative practice. Iterative processes which “play around” with the challenge and encourage creative prototyping where the fear of failure is depersonalized and the focus is on the joy of the challenge itself. Children know this, but adults, who base most major decision on pre formed assumptions, have forgotten to ask the kindergartener´s favourite question: Why?

We loved meeting the students at Agora Portals, and are greatful to the organisers for doing this in such a student-centred way. We learned a lot that day and enjoyed every second. We hope our marshmallowers feel the same way!